Summer is coming to a close and autumn approaches, which means that canning season is here!

While we have always enjoyed these preserved-at-home treats, we have only just made our first foray into canning. While were twiddling our thumbs, waiting for the garden harvest to mature, our neighbor Dan from the Shady 80 fearlessly went into the wild to harvest nature's bounty of prickly pear cactus fruits. 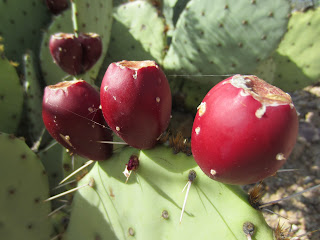 Armed only with a plastic bucket and a pair of grill tongs, he collected some of the prickly pear tunas and made a fruit juice at home with a little sugar. He raved about how tasty and refreshing his juice turned out, which inspired us to grab the tongs and a bucket, too.

Not surprisingly, perhaps, it turned out that gathering the spiny fruit was actually the easiest part. Then the tunas had to be cleaned, cooked, and pulped with a potato masher.

Finally the mess was filtered through cloth and we had over a gallon of primo cactus fruit juice in one hand, and about ten pounds of leftover skins and seeds (pomace) in the other. The pomace went to the compost, but one day we could dry it out and pulverize it into flour (apparently people are doing this with wine pomace, already). 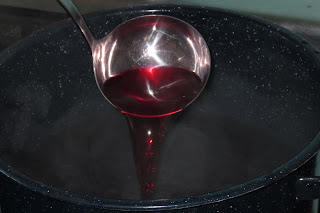 Now that we have so much tuna juice in the fridge (disclaimer: no fish were harmed, only cactus tunas were used), we have a lot of jelly to make. Cooking the juice with sugar and pectin isn't hard, or very time consuming. Priming, filling, and processing the jars is a little intimidating. Doing both and having everything ready to go at the critical moment is hard (so is not making a huge, sticky mess).

Eating the finished jelly is really easy, though. Casey's on his second 10oz jar. And we've got a lot of beta-testers out there, chowing down on the cactus confection. We're looking forward to their feedback (and hoping to get them hooked so they'll buy some at the farmers market later!).
Meanwhile, we've been looking around and noticed how well the Texas persimmons are doing this year. We found another Texan blogger who has successfully made jelly from the dark, sweet fruit, and perhaps we can give his recipe a try this summer. It probably wouldn't be a bad idea to plant a few female trees around the homestead!