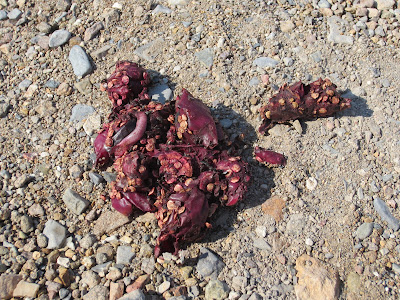 This present was left for us at the garage, near the dogs' water pan.

Just goes to show that the Javelina are gorging themselves on tunas, the purple fruit of the prickly pear cactus.

We're even getting some leaves and flowers back for the first time since the hail.

Email ThisBlogThis!Share to TwitterShare to FacebookShare to Pinterest
Labels: wildlife

Today was an Alpine Day.   We seem to have more Alpine Days than most people down here, but at least we get decent fuel economy with our old Rangers.

The main event today was taking the canine crew to our vet, Dr. Dodson.

New pack member Wrinkles is doing great overall, but needs some medicine to stay healthy while she recovers from a surgery. 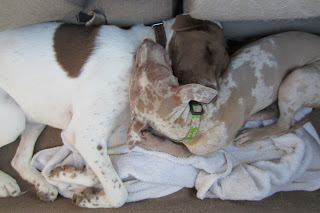 Naia kept watch over her puppy, and showed her how a pro handles an eight-hour shopping trip.

Since the severe thunderstorm ten days ago, the desert has been going crazy with activity.

The old dam at Cafe Colando is still holding water, though it's dropped a lot.

There are swarms of dragonflies, butterflies, mosquitoes (gah!), and other winged insects in the air.

And the frogs are chirping into the wee hours of the morning.  It's a great sound to fall asleep to.
Posted by All Energies at 10:14 PM 4 comments: 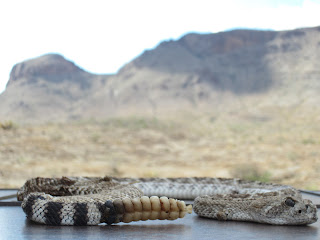 We killed this rattlesnake last night, at about one AM. He or she was hanging out underneath our house, near the stairs.

This one rattled right away, so we were able to bring the dogs inside before they even realized the snake was there. 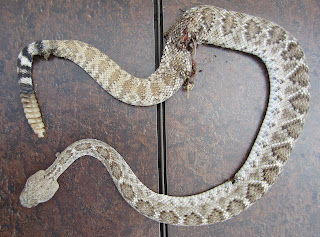 This is a Western Diamondback, Crotalus atrox, which is probably the most common venomous snake here.

We had expected to find one at the coop, but this one preferred our stack of wall tiles and mastic. 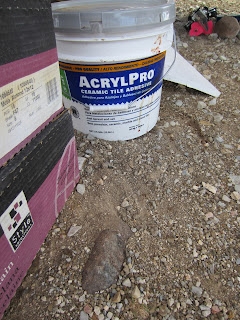 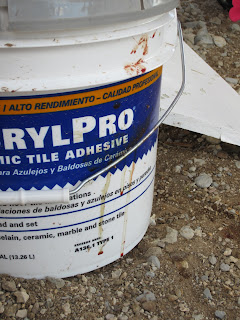 I've zoomed into the head to show the ocular scales. I've talked to a lot of people about how to tell a Western Diamondback from the more dangerous Mojave. 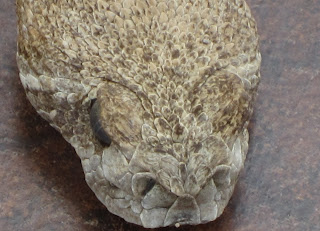 The most definitive difference between the two is the number and size of the scales between the snake's eyes. 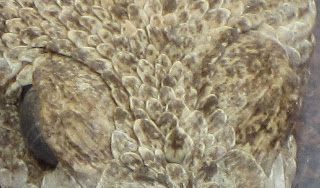 Many small scales between the eyes prove that this snake is a Western Diamondback.

Just a few large scales would indicate a Mojave. 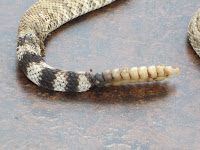 This one also demonstrates an even pattern of white and black stripes on the "coon tail" section below the rattle.
Mojaves are more likely to have a predominantly white coon tail.

Many people will tell you that green rattlesnakes are Mojaves.  But color is actually an unreliable indicator, as both species appear in a wide (and overlapping) range of colors.

Black Tail Rattlesnakes are also often greenish-colored, but much mellower and they have a very distinctive black tail where the coon tail section would be.

But then (just when you thought you knew what you were looking for) there are wild hybrids.  Snakes that are both WD and Mojave.  If that's the case, then all bets are off.
Posted by All Energies at 11:05 AM 4 comments:

Email ThisBlogThis!Share to TwitterShare to FacebookShare to Pinterest
Labels: wildlife

We had a diesel generator to work on yesterday, and it's pretty rare that there's something about an IC engine we're surprised by.  But I have to say, a fuel filter clogged with flies was definitely a first.  Luckily it was a pretty simple fix. 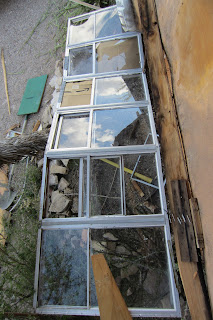 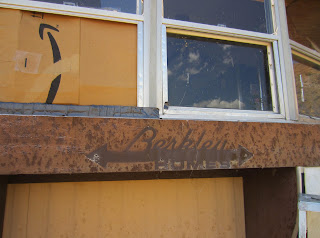 Replacing the windows is a great opportunity to get rid of her eyesore front-end. Not to mention that the new glazing will be much more energy efficient.

We moved the cactus garden to where the lettuce garden used to be.  They're not as tasty as the prevous residents, but more hail-tolerant (they were getting too much sun on the east side, anyway). 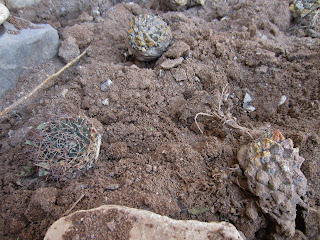 Folks say some cacti are like "dry whiskey," in that you'll be feeling tipsy if you eat one, but we'd rather stick with traditional whiskey.

This Mothera of a lepidopteran dropped by the Cafe at lunchtime yesterday. Pretty friendly guy/gal; he/she loved being handled. 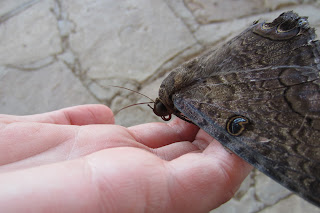 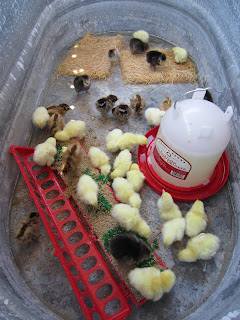 Our replacement chicks arrived today, hand delivered by the US Postal System and our local driver Kevin.

All birds seemed healthy, save for one DOA meat bird.

Admittedly, we were a little shell-shocked after the massacre ... and Sprocket had been killed just a few weeks earlier ... so I went a little overboard and bought all the extra supplements.

The chicks won't mind, I'm sure.  And hopefully the "Broiler Booster" will help condition the meat birds so that their legs don't break!

Here's what we ordered from McMurray: 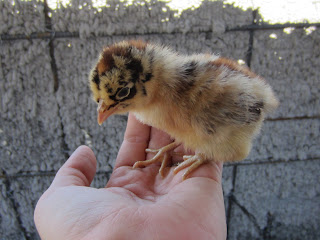 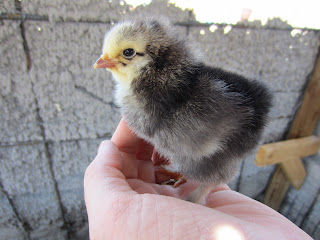 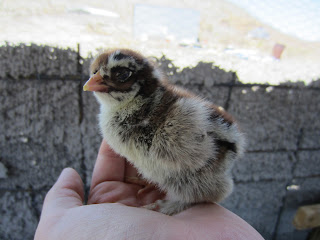 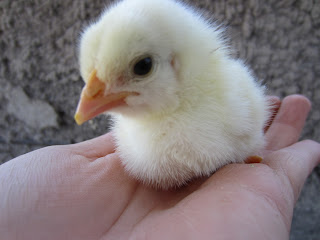 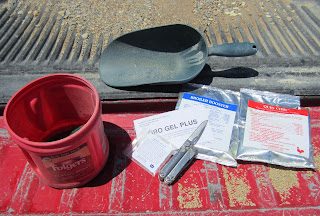 The hatchery gave us three free bonus chicks, too: one Jumbo Cornish x Rock, one Dark Brahma, and one "Free Rare Exotic."

Sad to admit it, but we can't tell yet which one is the "Exotic" chick.  Should become more obvious as they grow ... must be one of the yellow chicks.
Posted by All Energies at 2:37 PM 1 comment: 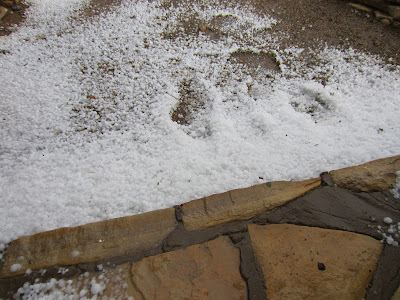 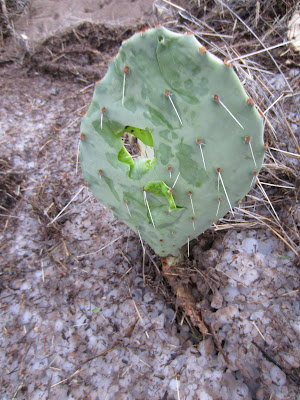 We had a really vicious storm hit us Friday night. It came on so fast even we 'clever' humans got caught in it.  Beautiful, towering clouds circled us all afternoon ... then in rolled a big dust storm.  The dust storm was a warning, one that we didn't heed, as what kicked up all that dust turned out to be quarter-sized hail.

The hail hit our immediate area incredibly hard.  Along with the two inches of rain, there must have been at least two inches of hail that pelted everything to smithereens.  All the foliage was knocked off the plants.  Immediately around our house, we lost about 80-90% of all the vegetation.

The rain and hail caused a massive flash flood, the worst we have ever seen since we first arrived here 3 years ago.  The flooding washed so much soil and vegetation away.  Lake Ament Road is impassible without a truck or SUV.  The road to Gigabytes Cabin 2.0 is completely impassable, as a deep rock gully has opened up across the road.  So that project is on hold for a while...

I'm sure there were a lot of critters killed in the sudden storm.  The dogs found two flattened mice bodies.  Almost as flat as paper.

The hail broke all the east windows in the Cafe Colando. It also killed much of the gardens, including Sprocket's agave.

After all is said and done, we pulled through just fine.  None of our animals were hurt, and only some minor damage was incurred on a couple of buildings.  The roads are very bad, though, and we have a lot of clean up to do.

Feels like we've been moving mountains for days now. 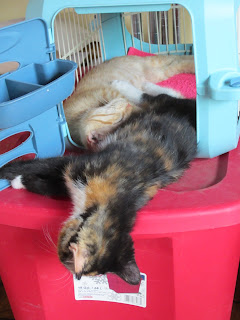 We adopted a pair of kittens from the Alpine Humane Society last week.  We are calling the male (orange tabby) Nacho, and the female (calico) Corazon, or Cora for short.

The cats will be vermin defense no. 1 on our ranch, and they are adjusting to their new environment very well.  Naia has been exceptionally well behaved around the kittens, and they are also becoming very relaxed around dogs.

For now, they are just adorable entertainment for us and Naia.  We may try to acclimate them to the chickens later, but no miracles predicted.... 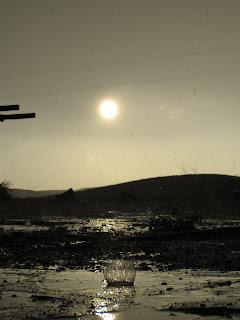 We also were pleasantly surprised by a sudden downpour yesterday evening, around dinner time.  We caught a half-inch of rain in about 30 or 40 minutes, and it almost seemed as though the creeks would be running.  If we had gotten just a little more precipitation, the roads would have washed a bit, but the rain stopped before that could happen.

After the rain stopped and we could hit the roads again, we headed over to the West Corazon Draw which runs through our HQ's 20 acres.  No frogs spotted yet, but we're keeping our ears open at night.

NOAA predicts a 30% chance of rain for the rest of the week, so we'll have our fingers crossed. 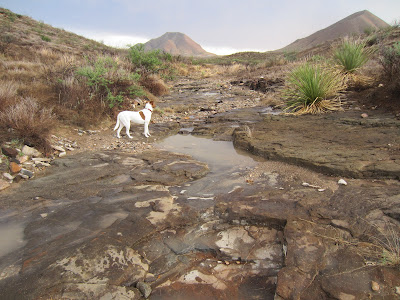 Before the sky got too dark, we hopped on the Bobcat to move some nice, damp earth around.  We recently repaired the lighting circuit, so we can run at night.

We used some of the earth excavated at the barn site to bolster the downhill side of the barn.

It's still a work in progress, and there is much to do before we can start dairying.  For now, the roof makes a great cover for parking cars and equipment!  And it's already catching rain for us! 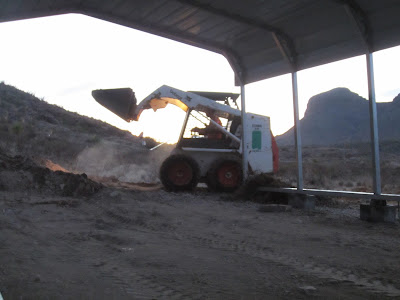