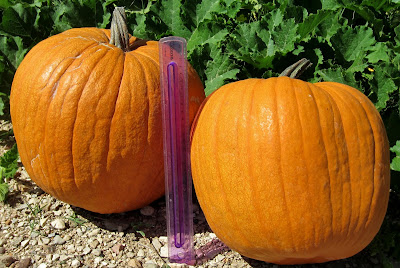 Since we began in earnest this spring, our garden has been a wonderfully fun experiment with a respectable amount of success, to boot.  Above are our first two pumpkins harvested. The one on the left weighs 14.2 pounds, and the one on the right weighs a little less, 11.2 pounds.

But after those first two were harvested a couple weeks ago, there seemed to be no more pumpkins, sadly. So I decided to brush up on my third grade botany, and quickly realized that the male and female flowers are easy to differentiate.

You can see above that the male flower on the left has a single anther, and the female on the right has a stigma with several fronds. Behind the showy part of the flower, the female flowers have a very noticeable ovary, or as I like to call them, proto-pumpkin (below). 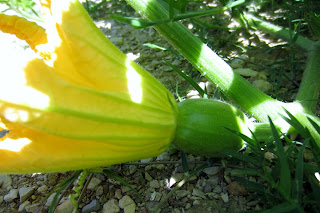 After observing the flowers over a few days, I noticed two problems.  Not only did males flowers outnumber female flowers three-to-one, but the female flowers were not developing into fruit!  Instead, the little proto-pumpkins shriveled up a day or so after the flower withered.

So in retaliation to the poor reproduction rate, I have used a soft paintbrush to pollinate the female flowers myself during the past few days.  Yesterday, while searching for female flowers to pollinate, I found this sneaky little pumpkin growing in the shade of other plants:

Woo-hoo! These squash plants have been so easy and fun to grow, I can't wait to try some interesting heirloom varieties next time. I have a particular weakness for Cinderella (AKA fairytale) pumpkins, which are supposed to be as tasty as they are pretty. I also have a passion for Halloween and Dia de los Muertos, so I am really looking forward to autumn this year. 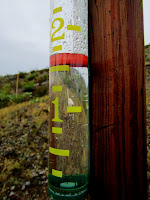 But that's not to say I want summer to be over too soon. So far, the summer of 2013 has brought us a lot of rain. In July alone we were lucky enough to get 3.6 inches of precipitation.

Rain also spurs almost every desert critter to reproduce. We've tolerated the mosquitoes and other annoying bugs, but the worst plague so far has been an onslaught of caterpillars that came to a head last week. The green monsters decimated both the pepper plants and the cabbages in our garden. Thanks to their rapacious appetites, our first promising pepper was a very sad, premature harvest. 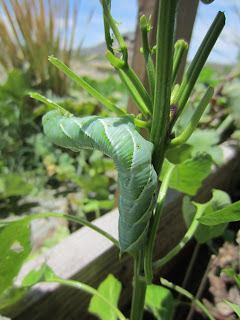 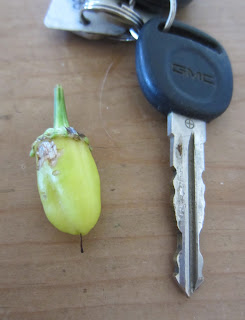 If you like our Facebook Page, then you might remember that back in March we were gifted a cutting from a Terlingua Creek cottonwood tree. We planted that cutting (basically just stuck it in the dirt and watered it) in front of the Last Resort, and it has really been growing like a weed, despite the constant nibbling of insects. 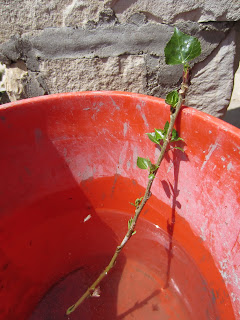 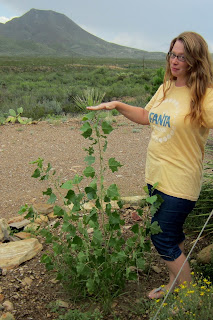 On the left is the original cottonwood tree cutting just after we got it home. It was just over 12" long back on March 20th of this year.

About four months later, it stood four feet tall and didn't show any signs of slowing down. It has already grown inches in the days since the photo on the right was taken.

The sapling is a reminder that despite the many challenges,  it is possible for something not only to survive, but even thrive. Every day we learn more about gardening in general, and about the peculiarities specific to growing in the mountains of the Chihuahuan Desert, but there is still so much wisdom yet to be acquired.
Posted by Sara at 8:00 PM