We occasionally see off-grid power systems get damaged by lightning, and the other day one of our good friends had her system go down during an electrical storm. She was inside when she heard a very loud, very close lightning strike, and simultaneously lost all power in her home. She rode out the storm, then came and got us the next day.

Back outside, we found one of the wind generators had been unconventionally wired, and was connected to the battery room via a long extension cord on the ground. Where the turbine wiring met the extension cord, out in the yard, the two ends of the connection had been blown apart, and were now five feet away from each other.

Inside the home, a surge protector had been blown apart, but lucky hadn't caught anything on fire, and managed to protect all the appliances and whatnot inside the home.

What should we learn from this?

First, lightning is noted as being upwards of 120 million volts, which allows it to arc across great distances. Really, that's all a bolt of lightning is: a buildup of electricity which then arcs through the air, trying to find its opposite charge (in this case the ground, but there is also ground-to-cloud lightning).

Second, it likes tall objects, especially those with wiring, which may offer an easier path to ground (like wind turbine towers).

And third, it will search for the path of least electrical resistance to a suitable earth ground. In this case, the lightning eventually found its ground through the telephone line. As a result, the phone in the house was destroyed and the telephone company's service in the area was affected.

These acts of nature have to be considered when we design and build any power system. A few things done differently could have greatly changed the outcome of this lightning strike.

First of all, the wind tower could have been grounded much better with such simple components as a copper clad grounding rod and a solid copper grounding wire.

Each wind generator should also be equipped with a lightning/surge arrestor, which will ground all the wiring when lightning strikes, typically self destructing in the process, but saving other components.

The inverter needed a much better ground than it had, and another lightning/surge arrestor on the 120VAC output side of the inverter would have protected the loads  from lightning strikes on the house or the turbines.

Our friend was lucky. Her batteries, solar panels, and household appliances were all fine, thanks to the telephone line's ground. With proper safety measures, she could have taken the lightning strike much better. Her new system will have all the above protections in place, ready for the next time an electrical storm rolls in. 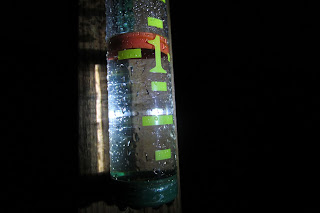 At the end of the rainy day, we had accumulated an inch of rain for this storm (that's across two days).  Everything is soaked pretty thoroughly, and the creeks (and roads) were flowing. 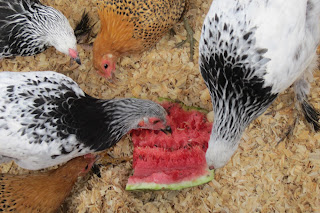 The presidio gallena was holding water, though the birds didn't seem to mind.  Some fresh wood chips took care of the problem, and gave the birds some new stuff to scratch and peck.
Posted by All Energies at 11:11 AM No comments: 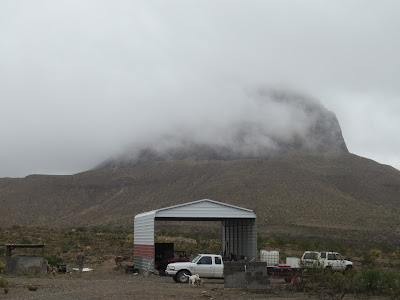 It's been raining today and yesterday, with no sign of stopping. The rain has been a double edged sword.  We're enjoying the cooler temperatures and catching some rain in our tank.  But a lightning strike wiped out most of our friend and neighbor's power system. 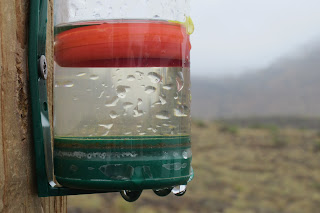 We've gotten over a half of an inch so far, which translates to potentially  70 gallons or so from our one little roof. When we have all our roofs on the property guttered, that half an inch of rain will mean some 425 gallons of water to our storage tanks.

There's been no sun for a couple days, but it is easier to be thrifty with power when you don't need every fan on to fight the heat.

We have just started building another SunStation for an off-gridder way out in the desert past the ghost town. This new one will be smaller than the first, with just over 400 rated watts of PV. We're using the same kind of panels that we use in our own power system, so we can definitely vouch for the durability.
Posted by All Energies at 11:39 AM No comments:

Got home yesterday to find all our animals healthy and happy! Nacho and Corazon are just as rambunctious as ever, and a little bit bigger, too.  We owe a huge debt to Dan & Jess, and Regina, who took care of the critters while we were gone! 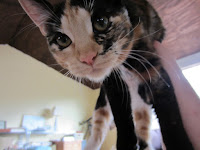 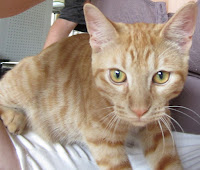 The chickens' new waterer worked perfectly, and they only used half of the 100 gallon reservoir in the three weeks we were gone.  That's just 0.15 gallons of water per bird, per day.  And there is no algae growing in the tank, the lines, or the bucket.  The new waterer is a huge success! 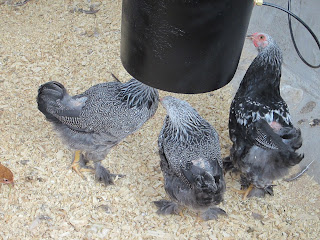 We also decided to separate the extra male chickens from the girls, to give everyone a little more room and a little less stress.  The chicken tractor has 64 square feet of free space now that all the meat birds are in the freezer.  When the birds become sexually mature, we'll build breeding pens and hopefully have some hen-raised chicks.

The Dark Brahma cockerels are easy to distinguish because they are almost entirely black, whereas the hens are penciled brown/black.  The Light Brahma cockerels are harder to distinguish, but now that they are almost 15 weeks old, the saddle feathers have come in. The saddle feathers on a male Brahma are longer and narrower than on a female.  Other than that, they look identical at this age.

My little Light Brahma cockerel is full of piss and vinegar, which makes sense because he is smaller than the other males but still maintains dominance over them.  It is also annoying, because he is the only bird I've ever had that bit me.  He better make some beautiful babies, or he will end up in freezer camp. 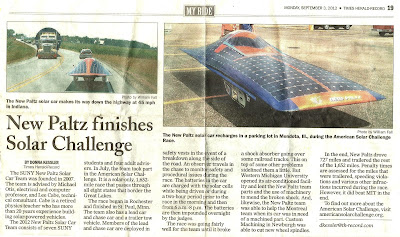 We're so happy to see that our former Renewable Energy professor from SUNY New Paltz finally achieved his dream of racing a solar car! He started out as a garbage truck driver and worked to become an engineer; we were lucky to have such an inspiring, passionate, and hardworking instructor. Congratulations, Mr. Otis!
Posted by All Energies at 9:32 AM No comments: